I was woken by a pair of Noisy Minor birds. Earlier that night, I had been reading an article by Andrew O’Hagan about nouns, specifically the nouns for alcohol used by Ernest Hemingway: Vermouth, white capri, whiskey, Asti, grappa, cognac, brandy, martini, barbera, champagne, Munich beer, Glühwien, marsala, chianti, occasionally even plain ‘beer’. ‘Hemingway,’ says O’Hagan, ‘will never say someone had a drink when he can say they had a vermouth.’ (London Review of Books 7 June 2012, p6)   When I thought of Hemingway before reading the essay, I’d thought of his writing in terms of verbs, his precise and unadorned verbs. 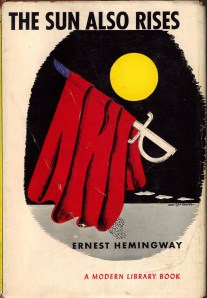 O’Hagan is on a noun crawl. Hemingway puts the nouns down on the page ‘with ego’, drawing ‘near to the kind of hero he wished he had been’. ‘You can have fun with this,’ writes O’Hagan trailing the drinkers through A Farewell to Arms, The Sun Also Rises and Fiesta.

I had been reading O’Hagan’s essay before falling asleep, and now had been woken by the noisy Noisy Minor birds which were lodging above my bedroom. It was 2am and they were trying to repair the nest the insulation installer had attempted to dislodge some days earlier when he’d been in the roof space laying down insulation bats. The birds had been my problem for two long nesting seasons. I hoisted the ladder up at the top of the stairs where the access panel to the roof is, was climbing the ladder into the roof space with a bright lamp in my hand, when the ladder collapsed, and I fell, then caught my grip on the edges of the open panel. I hung there, thinking about what I should next do.

Any series of complicated, small actions require care to render well in words. And how to compress time so that the immediacy of the experience (seconds) can be experienced by the reader with immediacy, even though the words on the page may take longer in time to read and apprehend?

Ali Smith in her new collection of essays, Artful, quotes José Saramago from his 1986 novel, The Stone Raft (translated by Giovanni Pontiero):

‘Writing is extremely difficult, it is an enormous responsibility, you need only think of the exhausting work involved in setting out events in chronological order, first this one, then that, or, if considered more convenient to achieve the right effect, today’s event placed before yesterday’s episode, and other no less risky acrobatics, the past treated as if it were new, the present as a continuous process without any present or ending, but, however hard writers might try, there is one feat they cannot achieve, that is to put into writing, in the same tense, two events which have occurred simultaneously.’ 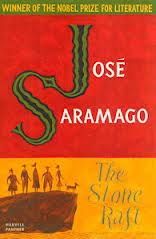 (In Carol Shields’ novel Larry’s Party, chapter one takes as much time to read (more or less) as it does for the character of Larry to walk from the cafe to the shoe shop. The chapter is titled, ‘Fifteen Minutes in the Life of Larry Weller’. But, this is an unusual congruence. Ian McEwen in Enduring Love tackles the management of immediacy by slowing the words down. He repeatedly interrupts the action of the men on the field running towards the tragedy of the loosened balloon, creating in the reader anticipation and anxiety.)

While I was hanging from the ceiling access panel, a number of thoughts came to me all at once, or it seemed as if they did. Was this a noun or a verb sort of experience? I heard with my mind’s ear the words: access panel, floor, ladder, hands. I heard ‘ladder’ a few times. I was alone in the house. There was no one who would hear my words if I said them aloud. And verbs: grip, hold, hang on, fall. I had a visual memory of Daniel Craig running along a crane-arm in Quantum of Solace, which is odd because I’d just seen Skyfall. I thought, ‘I’m not Daniel Craig. He’s a lot more athletic.’ Hanging on (‘for dear life’ would be pushing it) I felt in my fingers how hard it is to not drop, to not fall. Looking at my feet dangling below me, I could see there was nothing left to do, but to let go.

Fall was the essential verb.

Begin typing your search above and press return to search. Press Esc to cancel.